Flyers looking to the future

It wasn’t exactly the season that Philadelphia Flyers’ fans had envisioned when the campaign started, but players made it clear at their end of season press conference that they are already looking towards the future and getting ready next season.

“I’m looking forward to having a clean slate next year; I think we all are,” said Flyers’ goalie Carter Hart, via NBC. “And we’re all going to be better next year — I know it.”

“I believe in myself and I believe that I can be a top goaltender in this league,” Hart continued. “I’m just looking forward to a great offseason of training, get settled back in with my family and friends and get a good plan going forward for this offseason.”

The Flyers took a big step back this season after an impressive run last year that saw them reach the second round of the playoffs before being eliminated in seven games by the New York Islanders.

“I think just this year, it was it was challenging for everybody,” Hart said. “Tough circumstances with COVID and everything. Some guys it didn’t affect them and others more than others. It was a little bit difficult this year when you live alone and stuff and you just go back and forth from the rink to your apartment every day. But near the end, things were getting a lot better, I was hanging out with the boys a lot more, some of the boys were inviting me over for dinners. Just little things like that make it so much easier in, I guess, a weird year.”

The 22-year-old is in his third season with the Flyers after he was drafted by the club 48th overall in the 2016 NHL Entry Draft. Hart started all 14 playoff games last season that the Flyers were involved with and certainly would have loved the opportunity to play in the postseason again this year, but after a difficult year he is focusing on the positives.

“You kind of go home and you’re just in your own thoughts the whole time because you’re just sitting in your apartment alone,” Hart said. “Things were a lot better at the end, I was feeling a lot happier and hanging out with the boys more, and I think that that was kind of a big part of my play toward the end was just enjoying the game more and being more grateful for where I am. I mean, I’m in the NHL, I’m in the best league in the world. So instead of dwelling on other things, shifting my focus toward being more grateful.”

Hart was forced to miss the final 13 games of the season though due to an MCL sprain in his left knee and the extra time off could ultimately prove to be a good thing for the young goaltender.

The Flyers have a long offseason ahead of them, but should be back stronger and more competitive next season. 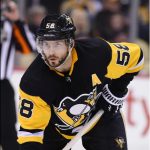