It seemed almost unimaginable a year ago that Pittsburgh Penguins legend Evgeni Malkin would still be without a contract at this point, allowing him to hit unrestricted free agency on Wednesday. However, that doesn’t necessarily mean he won’t be returning to the Penguins.

The organization locked up pending free agent Kris Letang to a six-year $36.6 million contract last Thursday and the 35-year-old defenseman would love nothing more than to have Malkin return to Pittsburgh with him next season. The Russian center also sent Letang a text message congratulating him on his new deal once the details were finalized.

“[Malkin] was really happy,” Letang related, via NHL.com. “I kind of said, ‘I hope you get this done soon so we keep it all together.’…It was more of a contract to fit both parties: give a chance to the Penguins to sign other players and also based on performance and what I did in the last few years. Make sure we can still compete and win and not take a big chunk.”

Letang was selected 62nd overall by the Penguins during the 2005 NHL Entry Draft, while Malkin was taken second overall in the 2004 NHL Entry Draft. The duo have since spent their entire NHL careers together in Pittsburgh. Along with Sidney Crosby who was selected first overall in 2005, the trio have been the core of the Penguins’ organization for nearly the past two decades, winning three Stanley Cups during that time.

“I’m optimistic,” Pittsburgh’s head coach Mike Sullivan said of Malkin re-signing with the club. “I think these guys mean so much to the city of Pittsburgh and the Penguins. The legacy that they’ve built speaks for itself. These guys are getting a little older, but they’re not old, and I think there’s a big difference. There’s still elite play in these guys, and so, for me, I’ve never been around a better core.”

Malkin sits third on Pittsburgh’s all-time points list with 1,146 in 981 games, trailing only Crosby and Mario Lemieux. During his 16 seasons with the Penguins, he has won a plethora of individual awards to go along with his three Stanley Cups including a Conn Smythe Award, a Hart Trophy, a Ted Lindsay Award, two Art Ross Trophies, and a Calder Trophy.

“In a salary cap world, there’s not a lot of perfect teams out there. Every team has their strengths and every team has their weaknesses, and we’re no different in that regard,” Sullivan said. “I know [Hextall] is doing his very best to surround our core guys with the best possible group that we can that gives us the best chance to win.”

The Penguins still have $15.3 million remaining in projected cap space, but still have to ink deals for Rickard Rakell and Evan Rodrigues who are both pending unrestricted free agents, as well as Kasperi Kapanen and Danton Heinen who are both restricted free agents. It remains to be seen how the whole Malkin scenario will play out, but fans and teammates would be devastated if he were to sign elsewhere. 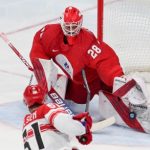