The New York Rangers have had a difficult start to the 2020-21 National Hockey League season, picking up just six points from their opening eight games. They have just two wins on the season and are in desperate need of turning things around before it is too late.

On Sunday, the team decided it was time to make a change and opted to place defenceman Tony DeAngelo on waivers after the 25-year-old struggled to keep up with the Pittsburgh Penguins on Saturday. The Rangers ended up losing the game 5-4 in overtime and knew they had to do something.

“This was just a decision the organization made and we will see how it works out,” Rangers’ head coach David Quinn told reporters, via Sportsnet. “I get the questions, I know you want more specifics, but like I said, a decision we made as an organization, and in 24 hours we will be able to probably be a little more specific.

“A handful of guys maybe aren’t playing at the level they were playing last year and you could probably say Tony would be one of them, but he’s not the only one.”

DeAngelo was selected with the 19th overall pick in the 2014 NHL Entry Draft by the Tampa Bay Lightning but never ended up making an appearance for the club at the NHL level. He was traded during the 2016 NHL Entry Draft to the Arizona Coyotes for second-round pick Libor Hajek.

The defenseman wouldn’t last in Arizona very long either before being shipped out again. He was traded on June 23, 2017, to the Rangers along with a first-round pick – seventh overall – in the 2017 NHL Entry Draft in exchange for Derek Stepan and Antti Raanta.

DeAngelo enjoyed a breakout year last season, putting up a career-high of 53 points. He had 15 goals and 38 assists in 68 games with the Rangers, earning him a lucrative contract extension. The defenceman put pen to paper on a new deal in October, signing a 2-year $9.6 million extension with New York. Considering the extension was just agreed upon a few short months ago, Sunday’s news comes as a shock to many both within and outside of the Rangers’ organization.

DeAngelo really struggled to match his performances from last season and was -6 early on in the campaign. He was also an important piece to New York’s power play last season, something the club will need to replace immediately.

It remains to be seen whether placing DeAngelo on waivers really was the right move and whether he will be able to land on his feet somewhere else and regain the stellar form he showed last season. New York does not have much time to turn things around though and we could be seeing them make a few more moves in the near future as they look to bolster their squad.

New York take on the Pittsburgh Penguins again on Monday evening at Madison Square Garden in a game they know they need to win. 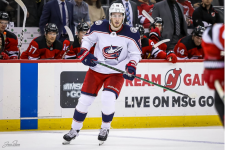