With a third of the year remaining the online casino industry continues to boom, with operators across the US currently riding the crest of a wave.

New game launches and lucrative business partnerships seem to be announced on an almost daily basis, highlighting the burgeoning nature of the sector right now.

Read on as we take a closer look at some of the top online casino industry news and updates from the past few days.

Pragmatic Play have already launched plenty of exciting new slots this year and they should have another winner on their hands with Chilli Heat Megaways.

With stunning graphics, six reels, between 2-8 rows and more than 200,000 potential paylines, this slot is a behemoth in every sense of the word.

Chilli Heat Megaways is a high volatility game with a return to player rate of 96.5 percent, making it hugely appealing to players who like their action to be fast and furious.

Resorts Digital Gaming have agreed a deal with software company EveryMatrix to integrate the turnkey supplier’s CasinoEngine into its online platform.

The New Jersey-based operator will incorporate a wide range of games from Spearhead Studios and Armadillo Studios into its online offering.

Every Matrix has embarked on an aggressive expansion mission in the United States over the past few months, and this latest link-up further strengthens their position.

The firm recently inked a deal with Kindred Group, and further lucrative partnerships are expected to be announced before the end of the year.

Poker expert Kevin Mathers sparked plenty of chatter amongst the poker community a few days ago by launching his first-ever subscription newsletter.

The first edition of ‘The Kevmath Report’ was issued this week and featured plenty of insights from a man who is recognized as the one of the most knowledgeable individuals in poker.

Mathers has built up a dedicated following on social media in recent years, helping people improve their poker skills through use of data and statistics.

The Kevmath Report is likely to take Mathers outside of his comfort zone, although the initial feedback to the first edition suggests he has already found a winning formula.

How be Successful in Your First Poker Tournament 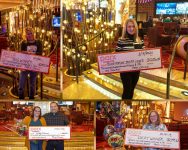 Online Casinos Don’t Expect This to Happen, But it Does!

Why You Should Play at a Licensed & Regulated Site