The Philadelphia Eagles welcome the Tampa Bay Buccaneers to town on Thursday night, as they look to win consecutive games for the first time this season. They won an important game away to the Carolina Panthers last week and are hoping to keep momentum going at home.

Tom Brady finished the fourth quarter last week against the Miami Dolphins on the bench icing his hand. He suffered a thumb injury which doesn’t seem to be too serious, but definitely has Buccaneers fans praying that their star quarterback will be okay. He is expected to play in Philadelphia on Thursday, which is great news for the visitors.

Tampa Bay come into the contest as seven-point favorites and it’s easy to see why after they dismantled the Dolphins last week 45-17. They have just one loss this season and look like strong candidates to get back to the Super Bowl. Go with the Buccaneers on the road to cover.

The Pittsburgh Steelers snapped a three-game losing streak with an impressive 27-19 win at home over the Denver Broncos last week. It was their first victory at Heinz Field all season and they are hoping to make it two in a row when they welcome the struggling Seattle Seahawks to town on Sunday evening.

The Seahawks will be without their star quarterback Russell Wilson, who remains out injured. He fractured his right middle finger last weekend against the Los Angeles Rams and just had surgery for it on Friday. He will be out for at least 4-6 weeks and the Seahawks will have a hard time trying to replace him.

The Steelers are still dealing with some injuries as well, but they are in a good position after last week’s win and will be full of confidence heading into this one.

Take the home team to cover the 4.5-point spread as they hand Seattle their second consecutive loss.

The New England Patriots ended their two-game losing streak last week in Houston, but needed a last-minute field goal to beat a team that lost 40-0 to the Buffalo Bills the week prior. New England’s only two wins of the season thus far came against the New York Jets and the aforementioned Texans, who may be two of the worst teams in the entire NFL. They will be in for a long day against a very good Dallas Cowboys team.

The Cowboys have been red hot since their opening night loss to the Tampa Bay Buccaneers. Dak Prescott is proving himself to legitimately be one of the best quarterbacks in the league and will be excited to take on a Patriots defense that looked shaky at best last weekend. The Cowboys have put up at least 36 points in their last three games and could run up the scoreboard on Sunday in New England.

Go with the visitors to cover the four points with the over also worth laying money on.

It’s been a tough week for the Las Vegas Raiders, who were downed by the Los Angeles Chargers last weekend and are dealing with the fallout of Jon Gruden’s racist and homophobic emails. The coach was quickly let go by the organization, but still it will not be easy to forget about it all and focus on a difficult game in Denver.

The Broncos have been one of the biggest surprises in the NFL after a fantastic start to the season. However, they have now lost back-to-back games against the Baltimore Ravens and Pittsburgh Steelers and will be looking to prove that they are legitimate contenders in the AFC West.

Both teams currently sit with a 3-2 record and understand the importance of this contest. It could have massive playoff implications down the line, so expect to see an intense affair between two rivals.

Despite the Gruden controversy, four points still seems too much for the Broncos who did not look great last weekend in Pittsburgh. Take the visitors to cover.

The Buffalo Bills proved they are the real deal last week with a statement win over the defending AFC champions, the Kansas City Chiefs. The Bills went into Arrowhead Stadium and dominated on both sides of the ball. Josh Allen has put himself into the MVP conversation as many start to argue he is the best quarterback in the league.

The Tennessee Titans dominated the Bills last year, but they relied on their running game in order to do so. The Bills defense is much better than they were a year ago and the Titans will need to find another way to hurt them offensively.

These two sides could easily meet again in the playoffs, making this contest all the more important. The 5.5-point spread may seem high, but given what the Bills did to the Chiefs last weekend, it’s understandable. Go with the visitors to earn their sixth consecutive win as they demonstrate they are a complete team. 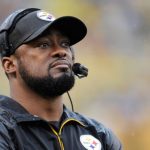 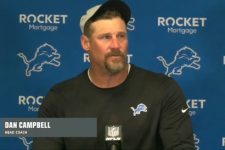 Dan Campbell breaks down after loss