The Pittsburgh Steelers head into week 17 of the NFL regular season with a 7-7-1 record and sitting outside of the playoff picture looking in. They are currently in 11th spot in the AFC standings, but still have an opportunity to sneak into the postseason if they can win their final two games of the year. That will not be easy though considering they are both against AFC North rivals.

The Steelers host the Cleveland Browns on Monday night before concluding the campaign against the Baltimore Ravens at M&T Bank Stadium in week 18. The Steelers could end any chances the Browns have of getting into the playoffs with a victory on Sunday night. Cleveland are just 7-8 on the season and sit one spot back of the Steelers in the AFC standings.

“The road is getting narrow for us and for them and I think that’s a component to this that I’m gonna keep talking about with our guys during the course of the work week,” Steelers head coach Mike Tomlin told members of the media on Tuesday, via NFL.com. “We’ve absorbed some negativity, they’ve absorbed some negativity, it’s about getting the best out of ourselves and I’m sure it’s the same for them.

“So they’re making some decisions about how they want to play ball this week, what best engineers victory for them and so all we have is our in-stadium experience against them and what’s on tape and our in-stadium experience plus what’s on tape tells us that we better work our tails off to minimize their run game and ﻿Nick Chubb and we better not let Myles Garrett wreck it.”

The Steelers have reached the playoffs in five of the last seven seasons, including last year when they won the AFC North division. However, the Steelers haven’t shown the same firepower offensively as we saw last season, with many quick to point the blame at offensive coordinator Matt Canada and his play-calling decisions. Canada’s head coach quickly defended him though when questioned about it.

“I have no reservations about the play-calling component of his job and what he’s done,” Tomlin said of Canada. “But I also will acknowledge there’s probably a learning curve at every job that pertains to the National Football League. A college equipment man that becomes a pro equipment man, his job is somewhat different as I’m sure someone that covers college football in your space, it becomes significantly different when they cover professional football. I think that’s a reasonable discussion regardless of what we’re talking about in our ecosystem that is football.”

The Steelers are just hoping Sunday night won’t be Ben Roethlisberger’s final game at Heinz Field. The Steelers legend is rumored to be retiring at the end of the current campaign and if the Steelers don’t find a way to get into the playoffs, Sunday could be the final time Big Ben plays in Pittsburgh.

Kickoff for Sunday night’s game between the Cleveland Browns and Pittsburgh Steelers is scheduled for 8:20 p.m. ET. 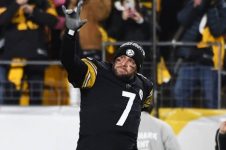