It is only week five in the National Football League, but the Detroit Lions have already suffered a couple of heartbreaking losses. They remain in pursuit of their first victory of the season after another disappointing ending on Sunday afternoon against the Minnesota Vikings. The Lions found themselves up 17-16 with just 37 seconds left on the clock after rallying from a 10-point deficit, but ultimately it wasn’t meant to be for Detroit or their fans.

Vikings kicker Greg Joseph hit an incredible 54-yard field goal with time expiring to give the home team the 19-17 victory at the death. It wasn’t the first close contest they lost this season though, as the Baltimore Ravens beat them in week three in similar fashion. Justin Tucker hit an NFL record 66-yard field goal to give Baltimore a last-second victory to deny the Lions a win.

Dan Campbell was brought in as head coach during the offseason to try and change the culture of the organization and following the loss, he showed just how much failing to win hurt him.

“When you see your players give all that they have and you lose that way, it’s tough,” Campbell said while about to tear up, via the Detroit Press. “You don’t want that for them, but we’ll be better for it. And there again, credit Minnesota, but we made the one mistake that cost us. And so ultimately, we didn’t do enough to win. But I was proud of them, and I love the fight that they have in them. And I love the grit.”

Campbell wasn’t the only one emotional after the loss, with linebacker Trey Flowers also expressing his feelings to the media.

Despite having his heart broken on multiple occasions this season, Campbell refuses to give up and won’t allow his team to quit on the season either.

“When you put everything out there on the line like they did and like they do, you want it for them and you want it for everybody,” Campbell said. “Everybody gives of themselves, a lot of time, lot of effort. Hey, that’s what we do. And you just, you want it. You want it for everybody, man. And you want to earn one and we’re this close. We haven’t done it, so we’re still — we’re not quite there. We haven’t quite got over the hump, but I do think in the long run this is going to pay dividends for us. As ugly as it is right now and hard to swallow, I do think we’re building something special here that’s going to serve us well in the long term.”

The Lions now sit at 0-5 and at the bottom of the NFC standings. Detroit and the Jacksonville Jaguars are the NFL’s only winless teams heading into week six of the season.

Campbell’s men will get another opportunity to pick up their first victory of the campaign when they host the Cincinnati Bengals at Ford Field on Sunday afternoon. 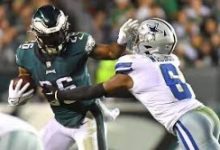 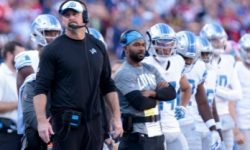 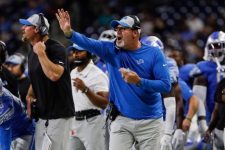