Few players in professional sports get to spend their entire career with one franchise these days, but Ben Roethlisberger is one player that certainly sticks out. Selected 11th overall in the 2004 NFL Draft by the Pittsburgh Steelers, Roethlisberger spent the next 18 seasons plying his trade in Pennsylvania.

However, it looks like the star quarterback is ready to call it quits at the age of 39 and he may have played his final game ever at Heinz Field on Monday night, with the Steelers beating the Cleveland Browns 26-14.

“Um, you know what, it’s funny because, probably not the way you wanted it, other than the win,” Roethlisberger – holding back tears – told ESPN after the game when asked how his final game at Heinz Field went, via NFL.com. “And that’s all that really matters. That’s kind of been the story of my career. It’s not always pretty, but we find a way. Man, did our defense step up tonight and the guys, it was just so much fun to be out here. These are the best fans in sports and this is the best place to play.”

Roethlisberger still has another game to play in week 18 against the Baltimore Ravens at M&T Bank Stadium, but he has probably played his final game in front of the Steelers fans. Pittsburgh still have a shot at getting in the playoffs, but even if they do they will not be playing any more home games this season.

Prior to the game starting on Monday night, fellow Steelers captains Cam Heyward and Derek Watt – who normally walk alongside Roethlisberger for the pregame coin toss – stopped ahead of time, leaving the quarterback standing by himself at midfield. It was an endearing moment.

“We knew if we let Ben know ahead of time, he would’ve been like, ‘No, don’t do that,'” Heyward said, via ESPN. “So we took it out of his hands. He was a little bit annoyed, but we wanted to give him every bit of opportunity to celebrate this.”

The quarterback has led the Steelers to two Super Bowls during his time in Pittsburgh and been named to the Pro Bowl a total of six times. He will go down as one of the greatest to ever play the position after a storied career.

“Ben did a really nice job of setting the pace,” Pittsburgh coach Mike Tomlin said. “He was singularly focused. It was business as usual, and so he was easy to follow, and I think that everybody got their vibe from him in that way. Obviously, it was an extremely emotional night and all that, but he did a good job kind of setting the post for that approach all week.”

The Steelers will be hoping that Roethlisberger still has a few more games left in his career, but it means they need to get the job done on Sunday against the Ravens. That should be an intense affair and one worth certainly keeping an eye on given the implications. Kickoff is scheduled for 1 p.m. ET. 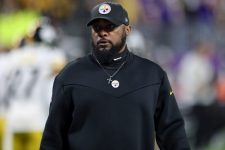