It has been a challenging time for professional sports leagues across the globe, with the National Basketball Association being no exception. The COVID-19 pandemic has forced the league to alter its schedule and reduce the amount of games played during the regular season by 10.

Originally, the NBA decided to forego its annual All-Star Game tradition choosing to give the players a five-day break in March instead. However, it looks like the league has changed stance and will hold an All-Star Game at the beginning of March in Atlanta.

This decision did not exactly sit well with the league’s biggest star, Lebron James.

“I have zero energy and zero excitement about an All-Star Game this year,” James said on a virtual press conference after his Los Angeles Lakers defeated the Denver Nuggets, via ESPN. “I don’t even understand why we’re having an All-Star Game.”

The Lakers were crowned NBA champions on October 11th after spending months in the NBA Bubble in Orlando and have had much less time off between seasons than they are typically used to.

“Short offseason for myself and my teammates, 71 days,” James continued. “And then coming into this season, we were told that we were not having an All-Star Game, so we’d have a nice little break. Five days [in March] from the 5th through the 10th, an opportunity for me to kind of recalibrate for the second half of the season. My teammates as well. Some of the guys in the league.

“And then they throw an All-Star Game on us like this and just breaks that all the way up. So, um, pretty much kind of a slap in the face.”

The 36-year-old has played in 16 All-Star Games and is likely to be named to his 17th when fan voting concludes. James is currently leading the West in votes from fans. Although the reigning NBA Finals MVP isn’t exactly thrilled about the idea of going to Atlanta for an All-Star Game, he will be there if he is selected.

“It’s the agreement that the players’ association and the league came about…it’s out of my hands,” James said. “I’ll be there if I’m selected. But I’ll be there physically, but not mentally.”

James isn’t the only superstar unhappy with the idea of an NBA All-Star Game with Giannis Antetokounmpo echoing many of the same sentiments following the Milwaukee Bucks’ win over Cleveland.

“I think every player was looking forward to those five days, seven days, whatever the days are. We’ve got to all follow the big dog,” Antetokounmpo said – referring to James, via ESPN. “The big dog says he has zero excitement and zero energy for the All-Star Game, and I’m the same way. I really right now don’t care about the All-Star Game. We cannot see our families.

“Like, I can’t worry about the All-Star Game. I want to see my family. I want to go see my little brother in Spain, I want my brother to come see me,” he added. “So I’m the same way. I’ve got zero energy, zero excitement. At the end of the day, if they tell us we’re gonna show up, we’ve got to do our job. I’m always gonna do my job. I’m always showing up, showing the right example. But at the end of the day inside, deep down, I don’t want to do it. I want to get some break.”

The League has not made the All-Star Game official yet, but it is looking likely to be scheduled for the evening of March 7th. 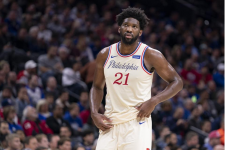