Joel Embiid made history on Sunday before the Philadelphia 76ers even took the court at Wells Fargo Center against the Detroit Pistons. The 28-year-old became the first-ever international player to claim the NBA scoring title when Giannis Antetokounmpo was rested in the Milwaukee Bucks’ final game of the season against the Cleveland Cavaliers. As a result, he was also rested and did not feature in the 76ers’ 118-106 victory over the Pistons.

The Cameroonian was already a heavy favorite to claim the honor heading into Sunday, but Antetokounmpo not playing sealed the deal. Embiid becomes the first center to win the scoring title since Shaquille O’Neal did it back in the 1999-2000 campaign.

It hasn’t been an easy season for Embiid and the 76ers either, given all the drama surrounding Ben Simmons heading into the year. However, the center has done a good job putting everything behind him and concentrating on getting the job done on the court.

His head coach made it clear that he believes Embiid should also be named the NBA MVP.

“I don’t do a lot of campaigning, and I’m not going to sit here and do a whole bunch,” Doc Rivers said, via NBA.com. “I think Joel has campaigned enough with his play. He really has. I don’t think people realize how hard it is for a center to lead the NBA in scoring. It’s so much easier for guards because they have the ball and they can shoot whenever they want to. Centers are incumbent not only on getting the ball but they’re the easiest guy to get trapped as well.”

Embiid’s teammate Tobias Harris took to Twitter to tweet M.V.P. in honor of the star winning the NBA scoring title, while the rest of the league continues to heap praise on the center as well.

“We haven’t seen a guy like this in the history of the league who has this kind of power and skill,” Indiana Pacers head coach Rick Carlisle said after Embiid put up 41 points against his side on Saturday night. “He’s able to score on all three levels effortlessly. He’s an amazing player, and it will be interesting to see what teams do in the playoffs to try to slow him down.”

Despite the strong regular season Embiid has had, fans of the 76ers are desperate to see him perform in the playoffs. Philadelphia finished first in the Eastern Conference last season but were eliminated in the second round of the playoffs by the Atlanta Hawks.

The 76ers finished the 2021-22 campaign fourth in the conference after they took out the Pistons on Sunday night. They end the regular season with a 51-31 record and will take on the 2019 NBA Champions the Toronto Raptors in the opening round of the playoffs. 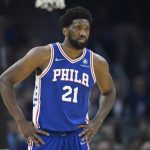 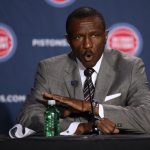