Fans of the Toronto Blue Jays were left frustrated for most of the winter, with the team failing to sign any big free agents early in the offseason. Supporters of the team watched on as the San Diego Padres and New York Mets snapped up some of the biggest names on the market, with the Blue Jays consistently being mentioned as runner-up. That has all changed in the past couple of weeks though.

Last week, the Blue Jays made headlines across Major League Baseball when they inked free agent George Springer to a massive six-year $150m deal. The 2017 World Series MVP was one of the most sought after stars and the fact that Toronto was able to land him says all you need to know about the direction the club is planning to go in. The team had said they planned to be active in the free agent market this offseason and they certainly were on Tuesday when it was revealed they had landed another top free agent.

Toronto signed shortstop Marcus Semien to a one-year $18m deal, providing the team with the infielder they had been looking for all winter. Semien’s acquisition provides the Blue Jays with a plethora of depth and options that will be important when the season starts.

The 30-year-old was drafted in the sixth-round of the 2011 Major League Baseball draft by the Chicago White Sox. He made his MLB debut for the White Sox in 2013, before being traded to the Oakland Athletics in a package deal for Jeff Samardzija and Michael Ynona following the 2014 campaign. He enjoyed a breakout year in 2019, putting up 33 home runs and leading the MLB with 747 plate appearances. He finished third in American League MVP voting.

While he did regress in 2020, the Blue Jays will still be thrilled with his signing as they are hoping they can help him regain the form he showed in 2019. Considering the 2020 MLB campaign was drastically different than any one prior to it due to the COVID-19 pandemic, Toronto is optimistic about Semien’s future.

The deal is also a low-risk one for Toronto as they are only committed to the shortstop for one season. It could backfire too though if he does manage to reach the numbers he did in 2019, as he will be looking for a big contract next year. Regardless though, the deal makes plenty of sense for both the Blue Jays and the player.

Toronto reached the postseason for the first time since 2016 last year and are looking to continue the progress they have made with their young squad. The Blue Jays had a respectable record of 32-28 during the shortened campaign, finishing third in the American League East. They have a talented young core have decided that now is the time to begin surrounding them with veteran pieces in the hopes it can lead them to their first World Series triumph since 1993. Fans of the club have plenty to be excited about entering the 2021 season. 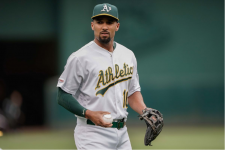 Corey Kluber looking to prove his worth