It has been a tough season for supporters of the Pittsburgh Pirates, who have had to endure another miserable campaign. The Pirates find themselves dead last in the National League Central Division, 25 games below .500 and struggling to compete on most nights.

On Monday, the club announced that they have decided to part ways with their hitting coach Rick Eckstein. The 48-year-old originally joined the Pirates following the 2018 campaign from the Minnesota Twins organization, where he was the minor league hitting coordinator during the 2016 and 2017 seasons.

“We are grateful for Rick’s dedication to the team and our players,” Pirates general manager Ben Cherington said, via MLB.com. “This was a difficult decision, as we have a great deal of respect for Rick. Making the decision now gives us the opportunity to use the rest of the season to focus on improvements in our hitting program while also starting the process of looking for a replacement. We wish Rick all the best moving forward.”

The Pirates have not made the postseason since 2015 and are desperate to try and turn things around for the franchise.

“The thing I want to say, first and foremost, is I want to thank Rick Eckstein for all of his work and his dedication to the Pirates over the last two years, when I was here and even before that,” manager Derek Shelton said, via MLB.com. “[I’m] wishing him nothing but the best moving forward.”

Pittsburgh have had a tough time offensively since Eckstein took over as hitting coach, with the club having an MLB-worst .665 OPS and .362 slugging percentage in 2021. But Shelton made it clear that his decision to let go of Eckstein wasn’t about individual stats or performances.

“It’s not anything specific to results this year with a specific hitter or the team,” Shelton said. “It’s just about how we’re going to grow our hitting group and the leadership of that moving forward.”

The Pirates are clearly keeping an eye on the future of the club as they figure out how best to proceed going forward.

“We just felt that once we decided this, it was better to do it now rather than wait until the end of the year,” Shelton said, “because we had come up with a plan that we were going to move forward with our hitting program with different leadership. Because of that, we felt it was best since we decided that now that we were going to do it immediately.”

The Pirates have not yet named Eckstein’s replacement, however the team will go with a collaboration approach with various coaches. Assistant hitting coach Christian Marrero will remain with the team and be involved with the collaboration process.

“I think it gives him the opportunity to maybe look at things a little bit differently, to have some different conversations – not only amongst the staff, but with the players – and more of an opportunity for him to learn and grow,” Shelton said. “Then, at the end of the year, we’ll evaluate everything moving forward.”

Gregory Solo out for the remainder of season 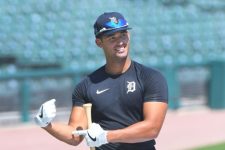