After Detroit Tigers’ starting pitcher Eduardo Rodriguez was forced to leave a game on May 18th against the Tampa Bay Rays after recording just one out, many believed the veteran would miss some time due to an injury. However, it wasn’t made official until Sunday when the Tigers announced that they have placed the 29-year=old on the 15-day injured list with a left ribcage sprain.

However, the team still isn’t quite sure just how severe the injury is or what the plan for his rehabilitation will be.

“We don’t know a ton more other than we’ve still got to rule out a couple of things to make sure there’s not a stress reaction in his ribcage,” Tigers’ manager A.J. Hinch said, via The Detroit Free Press. “Something is still bothering him when he throws. We’re not going to be able to test him, and we’re certainly not going to put him out there, until he gets a battery of tests.”

The Tigers had acquired Rodriguez as a free agent during the offseason, inking him to a five-year deal worth $77 million. He had been with the Boston Red Sox organization since 2014, when they picked him up in a trade with the Baltimore Orioles.

In his place, Detroit will turn to another Rodriguez – Elvin. He was called up in a corresponding move, while Eduardo Rodriguez undergoes more tests in Minneapolis.

“After that, we’re going to have to methodically ramp him back up to test it,” Hinch said. “That’s going to take enough time to put him on the injured list. We’re going to be cautious with him.”

Detroit has had a difficult start to the campaign, sitting at the very bottom of the American League Central division. It certainly hasn’t helped though that they’ve had to deal with a plethora of injuries, with a total of six starting pitchers currently on the injured list.

“It is frustrating,” Hinch said. “It’s easy to pile on and take is as a victim, but we’re not going to do that. We’ve got to win games, starting today. We’ve been saying that for a while, so talk is cheap, as they say. We need to focus on the field and not what’s happening to a club.”

The Tigers have missed the playoffs for the last seven consecutive seasons and were hoping that by landing Rodriguez in November, it would help the franchise get back to winning ways. It doesn’t look like that will be the case this year though as the Tigers have struggled to remain competitive in the difficult American League. While there is still time for Detroit to try and turn their season around, missing Rodriguez and most of their starting rotation will make that task nearly impossible. Fans are just hoping that their prized free-agent signing will be available again sooner than later. 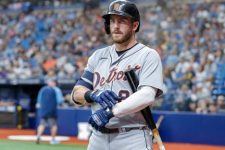 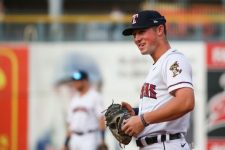